Within 5-6 years the surroundings of PGE Arena Gdańsk are to become a nationwide centre for leisure as new theme park, aquapark, tropical gardens, hotel and spa are to join the stadium. The district housing PGE Arena Gdańsk will be the future of Letnica. Before Euro 2012 this was a largely abandoned industrial precinct which is now reviving dynamically with new access routes. In fact, it’s already one of the best connected locations in Gdansk. This is why the municipality wants to go forward and implement what was already envisaged in 2006 as secondary infrastructure to the PGE Arena Gdańsk stadium. Spanning across 4.66 hectares (500,000 square feet), a new leisure hub would include an indoor theme park, aquapark, tropical gardens, spa and a hotel. The entire project could cost up to PLN 260 million ($66.6m / €62m), but the city hopes to cover only a small portion of investment needed. Plans of the city would make it Poland’s biggest and most modern leisure destination. Letnica is transforming rapidly. PGE Arena is already neighboured by new exposition center, which makes it more attractive to potential hotel operators.

RKW Rhode Kellermann Wawrowsky Architektur+Städtebau have marked the development of contemporary residential and working environments for 60 years. Established in Düsseldorf by Helmut Rhode in 1950, the office is managed today by a community of eight shareholders spanning generations. RKW Rhode Kellermann Wawrowsky Architektur+Städtebau is considered one of Germany’s most successful architectural offices. Over 100 awards from national and international competitions testify to our influence on the character of architecture, including more than 50 first prizes and many awards for exemplary buildings. 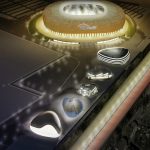 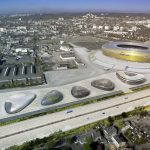